Samsung Galaxy S20 Ultra has been put to test by YouTube channel JerryRigEverything in a durability video that highlights its screen-resistant, glass sandwich design. The latest flagship phone by the South Korean company carries Corning Gorilla Glass 6 glass panels on both front and back sides. There is also a metal frame that appears to easily get some signs of wear and tear. Importantly, Samsung isn't advertising any ruggedness of the Galaxy S20 Ultra. It is, thus, fair to expect some delicacy on the construction front.

The nearly eight-and-a-half minute video by the JerryRigEverything channel begins with the infamous scratch test in which the narrator Zack Nelson tested the display protection of the Samsung Galaxy S20 Ultra. The phone is found to gain scratches at hardness levels between six and seven of Mohs' scale. This is just like what we saw on the Pixel 4 XL but unlike the Galaxy Z Flip foldable that started to show marks at Mohs level two.

“The phone will be able to handle everyday objects and fingernails without getting scratched or dented up,” Nelson asserted in the video.

After scratch testing the display, the narrator in the video moved to the front camera that also has the Corning Gorilla Glass 6 protection. He also attempted to evaluate the metal frame of the phone that did receive some scratches. While the frame, Nelson also found that the power and volume buttons of the Galaxy S20 Ultra can easily be removed by putting some pressure outward.

The screen of the Samsung Galaxy S20 Ultra was able to bear the heat of a lighter in the video. Similarly, the quad rear camera setup was found to resist scratches flawlessly.

Nelson also tried to put some scratches on the area that covers the in-display fingerprint sensor of the Galaxy S20 Ultra, but he failed to put any impact on its performance. The flagship model also passed the bend test, though it did sway subtly. 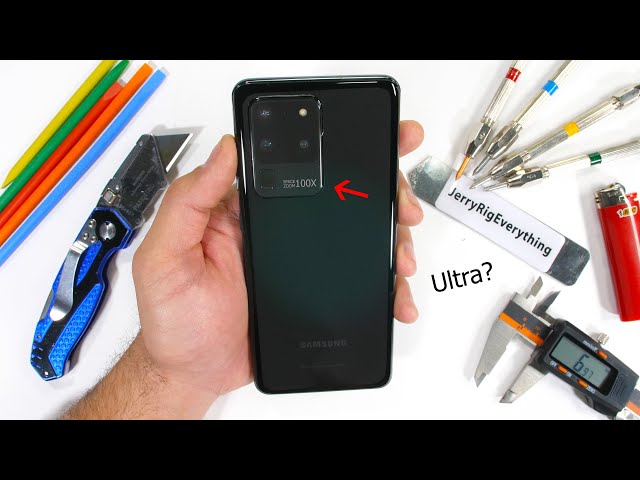 “The S20 Ultra does survive my durability test… No cracks, kinks, or permanent damage anywhere,” the narrator admitted in the durability video that featured some of the toughest tests you could want to perform on your phone.